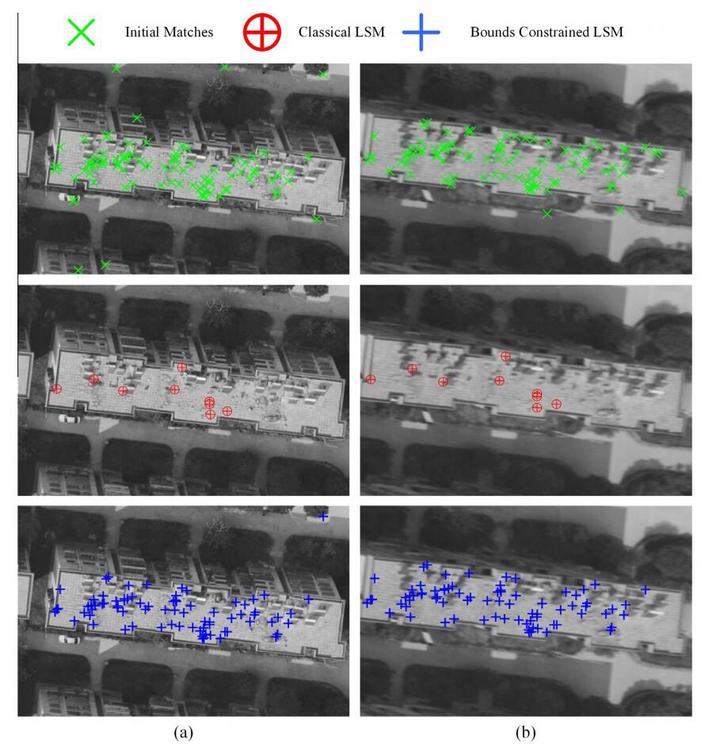 Least-squares matching is a standard procedure in photogrammetric applications for obtaining sub-pixel accuracies of image correspondences. However, least-squares matching has also been criticized for its instability, which is primarily reflected by the requests for the initial correspondence and favorable image quality. In image matching between oblique images, due to the blur, illumination differences and other effects, the image attributes of different views are notably different, which results in a more severe convergence problem. Aiming at improving the convergence rate and robustness of least-squares matching of oblique images, we incorporated prior geometric knowledge in the optimization process, which is reflected as the bounded constraints on the optimizing parameters that constrain the search for a solution to a reasonable region. Furthermore, to be resilient to outliers, we substituted the square loss with a robust loss function. To solve the composite problem, we reformulated the least-squares matching problem as a bound constrained optimization problem, which can be solved with bounds constrained Levenberg– Marquardt solver. Experimental results consisting of images from two different penta-view oblique camera systems confirmed that the proposed method shows guaranteed final convergences in various scenarios compared to the approximately 20– 50% convergence rate of classical least-squares matching.